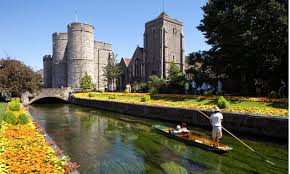 Eight years ago, in the summer of 2007, hardly anyone had heard of the term ‘credit crunch’, but now the expression has entered our daily language and even the Oxford Dictionary.  It took a few months throughout the autumn of 2007, before the crunch started to hit the Canterbury Property market, but in November / December 2007, and for the following seventeen months, Canterbury property values dropped each and every month like the proverbial stone. The Bank of England soon realised in the late summer of 2008 that the British economy was stalling under the continued pressure of the Credit Crunch. Therefore, between October 2008 and March 2009, interest rates dropped six times in six months from 5% to 0.5% to try and stimulate the British economy.
Thankfully, after a period of stagnation, the Canterbury property market started to recover slowly in 2010, but really took off strongly in late 2013 / early 2014 as property prices started to rocket. However, the heat was taken out of the market in late 2014/early 2015, with the new mortgage lending rules and some uncertainty, when some people had a dose of pre–election nerves.
With the Conservatives having been re-elected in May, the Canterbury property market regained its composure and in fact, there has been some ferocious competition among mortgage lenders, which has driven mortgage rates to record lows. Whilst I have no actual figures to back this up, I know an awful lot of long serving bank managers, mortgage arrangers and people in the finance industry, all of whom have told me on previous occasions when interest rates rose (1987, 1992, 1997 and 2003), it wasn’t the first rate rise that was the catalyst for many homeowners and landlords to re-mortgage but the second or third increase.  The reason being that it was only by the time of the third rate rise,  it started to hit the wallet.  However, the issue is, by the time of the second or third rate rise the best fixed rates, were in all instances, no longer available as they had been pulled by the banks months before.
But here is the good news for Canterbury homeowners and landlords, over the last few months a mortgage price war has broken out between lenders, with many slashing the rates on their deals to the lowest they have ever offered.  I read that the well respected UK financial website Moneyfacts said only a couple of weeks ago, the average two year fixed rate mortgage has fallen from 3.6% twelve months ago to just under 2.8%.
Interestingly, according to the Council of Mortgage Lenders, the level of mortgage lending had soared to a seven year high in the UK.  So what about Canterbury?  In Canterbury, if you added up everyone’s mortgage, it would total £1.2 billion.  Even more interesting is when we look at Canterbury and split it down into the individual areas of the city,
CT1 - Canterbury city centre£338.7m
CT2 - Harbledown, Rough Common, Sturry, Fordwich, Blean, Tyler Hill, Broad Oak, Westbere £341m
CT3 - Wingham £276.4m
CT4 - Chartham, Bridge £340m
Since 1971, the average interest rate has been 7.93%, making the current 0.5% very low.  So, if interest rates were to rise by only 2%, according to my research, the 2,330 Canterbury homeowners, who have a variable rate mortgage would, combined, have to pay an approximate additional £13,680,000 a year in mortgage payments.  That means every Canterbury homeowner with a variable rate mortgage, will on average have to pay an additional £5,871 a year or £489 a month in interest payments.
I know over the last couple of posts, I have talked about mortgages a lot however, I am not a mortgage arranger but a letting / estate agent and as regular readers know, I always talk about what I consider to be the most important issues when it comes to the Canterbury Property market and at the moment, in my humble opinion, this is the most important thing!
Buy to let is all about maximising your investment, increasing income and reducing costs.  I give advice, opinions, thoughts, concerns, worries, expectations and fears about the Canterbury Property market in my blog on the Canterbury Property Blog.  If you are interested in the Canterbury Property Market, you might learn something by visiting the blog. www.canterburypropertyblog.com
Posted by The Canterbury Property Blog at 08:31