29.7% of Canterbury Homes Are One Person Households I was having an interesting chat with a Canterbury Buy to Let landlord the other day when the subject of size of households came up in conversation.  For those of you who read my Brexit article published on the morning after the referendum, one of the reasons on why I thought the Canterbury property market would, in the medium to long term, be OK, was the fact that the size of households in the 21st Century was getting smaller – which would create demand for Canterbury Property and therefore keep property prices from dropping.

Looking at the stats going back to the early 1960’s, when the average number of people in a home was exactly 3, it has steadily over the years dropped by a fifth to today’s figure of 2.4 people per household. Doesn’t sound a lot, but if the population remained at the same level for the next 50 years and then we had the same 20% drop in household size, the UK would need to build an additional 5.28 million properties (or 105,769 per year) .. When you consider the Country is only building 139,800 properties a year ... it doesn’t leave much for people living longer and immigration. Looking closer to home...

In the Canterbury City Council area, the average
number of occupants per household is 2.3 people

When we look at the current picture nationally and split it down into tenure types (i.e. owned, council houses and private renting, a fascinating picture appears.

The vast majority of homeowners who don’t have a mortgage are occupied by one or two people (81% in fact), although this can be explained as residents being older, with some members of the family having moved out, or a pensioner living alone.  People living on their own are more likely to live in a Council house (43%) and the largest households (those with 4 or more people living in them are homeowners with a mortgage – but again, that can be explained as homeowners with families tend to need a mortgage to buy. What surprised me was the even spread of private rented households and how that sector of population is so evenly spread across the occupant range – in fact that sector is the closest to the national average, even though they only represent a sixth of the population. 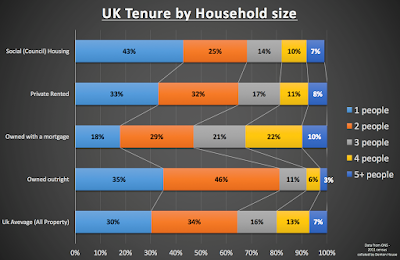 When we look at the Canterbury City Council figures for all tenures (Owned, Council and Private Rented) a slightly different picture appears... 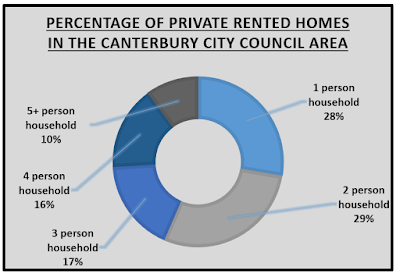 As you can see, Canterbury is not too dissimilar from the national picture but there is story to tell. If you are considering future buy to let purchases in the coming 12 to 18 months, I would seriously consider looking at 1 and 2 bed apartments. Even with the numbers stated, there are simply not enough 1 and 2 bed apartments to meet the demand. They have to be in the right part of Canterbury and priced realistically, but they will always let and when you need to sell, irrespective of market conditions at the time, will always be the target of buyers. To read more articles on the Canterbury Property Market and where I consider best buy to let deals are in Canterbury, please visit the Canterbury Property Market Blog www.canterburypropertyblog.com
Posted by The Canterbury Property Blog at 17:45