The 4,897 Canterbury Savers batten down the hatches with low interest rates set to continue into the 2020’s 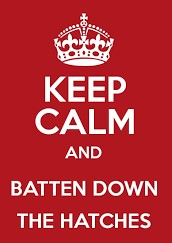 You might ask, what has the plight of the Canterbury savers to do with the Canterbury Property Market … everything in fact.  Read the newspapers, and every financial wizard is stating that with the decision of the Bank of England’s Monetary Policy Committee in early August to cut the Bank of England base rate to an all-time low of 0.25 per cent, savers should prepare themselves for interest rates to stay low well into the early 2020’s.
... And this isn’t some made up story to capture the headlines of newspaper editors. The yield (posh word for interest rate or return) on 10-year Government bonds is currently 0.61 per cent. This indicates that the money markets believe that the Bank of England’s base rate will, on average over the next ten years, be below the 0.61% rate they are buying the 10 year bonds at (because they would lose money if the average was over 0.61%). UK Interest rates are going to be low for a long time.
For those who have saved throughout their working lives and are looking for ways to maximise their savings, tying their money into property could prove advantageous. You see as a saver, I did a search of the internet and the best savings rate I could find was a 5-year fixed rate at 2.5% a year with Weatherbys Bank. Your £200,000 nest egg would earn you £5,000 a year – not much. However, on the other side of the fence, growth in Canterbury house prices and princely buy to let yields have made property investment in Canterbury an appealing option for many. According to my research, the...
Average Yield over the last five years for
Canterbury Buy to let property has been 5.6% a year
… and average Property Values in over the same period have risen by 23.3%.
Using these averages, the Canterbury landlord’s property would be worth £246,600 and they would have received a total of £56,000 in rent – making the total return £302,600. Meanwhile, whilst our 4,897 Canterbury Saver’s, using the average savings rates for the last 5 years, even if they had reinvested the interest, their £200,000 would only be £221,184.
There are risks as well as benefits to buy to let though. As my blog readers know, I tell it like it is and investing in buy to let means locking up capital in a property that may fall in value. Another option would be stock market income based investment funds, which are paying around 5%, especially if put your nest egg into a tax free Stocks and Shares ISA. Although you can only add £15,240 a year into an ISA, but you would also have the ability to sell up quickly if you want ... but one last thought…
The other side of the coin is that you cannot buy an unloved ‘stock market income based investment fund’ and set about renovating it and adding value yourself. The investment fund isn’t something that you can touch and feel, isn’t something tangible, isn’t something physical, isn’t something concrete, it isn’t bricks and mortar ... and that is why my fellow Canterbury homeowners and Canterbury landlords, the love affair of the British and Property will continue.
If you are considering becoming a new buy to let landlord in Canterbury, what do you know about the Canterbury property market? Do what many established landlords do and visit the Canterbury Property Blog where there is a catalogue of articles like this and where the best buy to lets deals are in Canterbury www.canterburypropertyblog.com 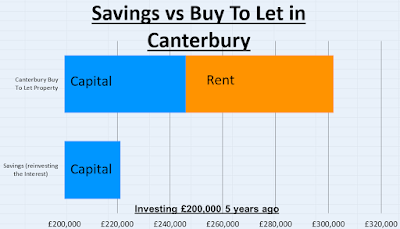 Posted by The Canterbury Property Blog at 09:32